Things That Should Never End

I am here today to file a petition against the phrase "all good things must come to an end." I hope that you can get through my highly complicated, important and convincing argument, which is:

I hope I didn't lose anyone back there.

Look, I can swallow "life is not fair." I can take "the grass is always greener," I may roll my eyes, but I accept them—like a champ. But when you come at me with something as offensive as "all good things must come to an end," a girl has to put up a fight.

But per usual, I don't really have it in me to put up a fight, so instead of just crawling into bed like a lazy sack o' (big) bones, I offer you this list of things that should never, I repeat, NEVER, ever, ever, ever—get the picture?—end.

1. Good books that a lot of people didn't like
The Corrections, by Jonathan Franzen 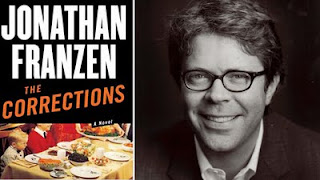 My love affair with Jonathan Franzen began long before people started hating him for this book and the novel that followed called "Freedom." Well, actually, "The Corrections" came out in 2001, and I first saw him speak in 2005, but that's all apples and oranges, my people. I'm saying I love the man. Critics who actually like him call his work "serious fiction," and while I would normally laugh at that, I can see what they mean. There is nothing simple about the plot lines, the characters, the language in Franzen's writing. His view of the world—perverted, cynical, hopeless—pervades the pages of his novels. It can make it hard to turn each page, more like a chore than an enjoyable task that many people look for in reading. But I am enjoying the struggle, the chomping on big words and—yes, a gal can admit it—using my dictionary from time to time. Franzen is an intellectual, and I knew it the first time I heard him read, back in '05, when he read excerpts from a piece on bird hunting. Within moments, I was hooked. He has a way of making me care about things I never thought I could ever understand, let alone have an opinion on. He never takes the easy route, spoon-feeding his readers, his fiction is work. It's a chore, like any other. But I know he is making me a better reader, a smarter one. And if he could just make it so these last 15 pages never end, I will vote for him for President.

2. This glass of red wine
Look closer, the bottle's empty. 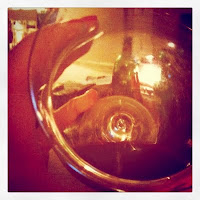 There's not much to say other than, AM I RIGHT? There is nary a sadder feeling, a more depressed state than a gal with a just-drunk empty glass o' wine.

3. Bowls of pasta
If you don't want to swim in this, you're lying to yourself.

Stop whatever it is that you're doing and go make this pasta now. N-O-W. Pioneer Woman, with all of her butter and her whole milk, does a body right. (When right means full of calories and badly needing a gym membership.)

4. Good T.V. shows
Stop hating on LOST and go watch it. Acceptable substitutions include: Mad Men, The Big C, The Wire, The West Wing, Boardwalk Empire, everything but the last episode of The Killing, I could go on, but I won't. 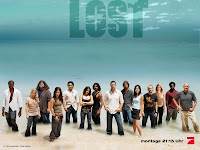 I was born a simple girl in a simple world. I grew up in a farm house, on a farm with no animals. We had casseroles for dinner most nights, we didn't say "shut up" and we only had three channels on T.V. In our butter-yellow farm house, T.V. was for boring people who got bored and didn't like trampolines and pushing each other into cow pies. This behavior—minus the cow pies—continued up until college. That all changed once I met my sweetie pie, and he introduced me to the world of good television. I didn't know such a thing existed, but now I have seen every teaser and special feature, heard every commentary, watched each pilot, viewed fan videos on youtube on repeat, listened to the soundtracks. I am up on the current-TV times. And, there are few things more cruel and unusual than having to say goodbye to a show, a cast of characters–your friends—that you've grown into for hours, months, years of your life. I don't like life without Sayid breaking a bad guy's neck with his feet. I don't appreciate the great state of New Jersey without Tony Soprano in it. I don't even want to go to Crab Fest in Baltimore, because I know that The Wire is no more. I am too depressed to go on... 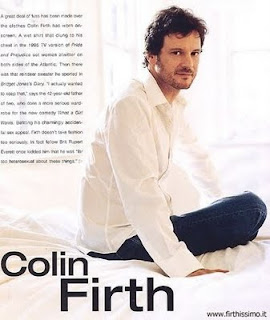 Why did I even go here? But seriously. I am shouting this one right up to the Big Man's ears. Don't do it, please. Just don't. I read "Tuck Everlasting," and I'm pretty sure with all of your powers and miracles that keeping one sweet, handsome, funny, humble, loving, scruffy, curly-haired, romantic, lean, tall, smiley British man won't break Ye Heavenly Bank. At least, if you're going to do it, good Lord, please just take me first.

PLP, i need to swim in it NOW. be over for dinner tonight. luff ya.

Count me among #1's naysayers.

I'm loving on the TV writing. I'm still smarting over living in a world where Kelly Taylor can't purse her lips in distaste at whomever is in front of her, and Brenda Walsh can't flounce off after saying "I hate you both. Never speak to me again."

Franzen is an author I would've read with abandon in my early 20s, ripe for the challenge. No mas. No mas.